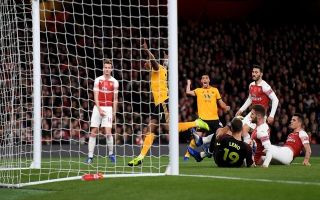 Wolves went into halftime with a shock lead against Arsenal after Ivan Cavaleiro capitalised on a Granit Xhaka mistake early on to hand the Wanderers the lead.

Only 13 minutes into the tie a lapse in concentration from Xhaka saw Portuguese winger Cavaleiro latch onto the ball and play a smart one-two with teammate Raul Jimenez before finishing the move with a tap in, much to Unai Emery’s dismay.

Xhaka has looked like a completely different player under Emery and fans were finally starting to see how important a role the 26-year-old could play in the Gunners midfield.

Unfortunately not going into halftime with a lead is becoming a recurring problem for the Gunners this season and fans have called for the side to start games in a much better fashion and to stop relying on second-half turnarounds.

There are only two teams in the Premier League this season not to go in at half-time leading:

Errors leading to goals seem to be a worrying trend for Arsenal and their defensive woes don’t seem to have improved under new manager Emery.

Arsenal have caused more errors leading to goals (17) in the Premier League since the beginning of the 2017/18 season than any other club.

Fans thought that Xhaka had turned over a new page last week after impressing in midfield against Jurgen Klopp’s devastating Liverpool side.

Check out some reaction to Xhaka’s first-half performance below:

When will Xhaka learn how to defend? Awful to watch today ?

You can't have week in week out stability with Mustafi, Xhaka and Kolasinac as defenders you need to rely on.

Xhaka ain't playing any worse than he usually does, this is simply his level. Gotten so used to it now that it's not even worth criticizing anymore.

There’s nothing I can say about Xhaka I haven’t already said. A goddamn clown

don't know why xhaka had to do that, unforgivable

Arsenal certainly have their work cut out for them during the second half.