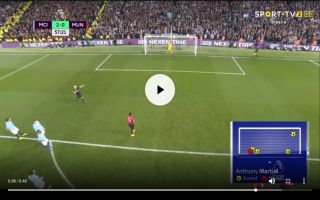 Manchester United’s in-form attacker Anthony Martial has given the Red Devils a lifeline after scoring from the spot after Romelu Lukaku was brought down by Manchester City goalkeeper Ederson in the box.

In the 56th minute of the match Ederson rushed out of his goal to bring down Lukaku only moments after the Belgian was brought on by United, the forward certainly had an instant impact for the Red Devils.

United have a great track record of pulling off shock comebacks and they could repeat Wednesday night’s heroics against Juventus against Manchester City this evening.