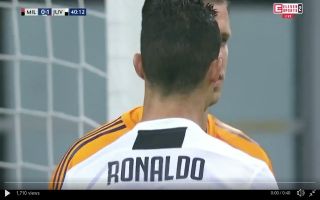 There was drama all over in a heated Serie A clash between Juventus and AC Milan which involved a stunning header, the use of VAR and a penalty being saved.

In the 40th minute of the tie AC Milan were awarded a penalty after Gonzalo Higuain was brought down in the Juventus box, the referee consulted the use of VAR to award the penalty.

This wasn’t the end of the drama as Higuain’s former Real Madrid teammate Cristiano Ronaldo told Juventus stopper Wojciech Szczesny which way to dive before the penalty was taken.

Ronaldo’s tip came in and the ex-Arsenal keeper saved Higuain’s penalty to see off a dramatic end to the first-half of action.

Check out a video of Higuain’s penalty miss courtesy of Eleven Sports UK below:

Ronaldo knows… ?#CR7 has a word in Szczesny's ear, and the keeper goes the right way to deny Higuain from the penalty spot! #SerieA live || https://t.co/fPSma92loW pic.twitter.com/uIPgf0ub8t

Check out the referee using VAR to award the penalty below:

HT: MIL 0-1 JUV – High tempo game at San Siro. Trademark header from Mandzukic put Juve one up and VAR overturned the ref's total failure to award this penalty (but Higuain missed from the spot).

Be sure to tune into the rest of the heated clash. Click here to find out how you can watch the game either online or through the comfort of your TV.