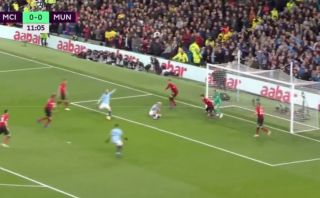 David Silva showed why he’s one of the best players in the Premier League this afternoon, as he put Man City 1-0 up against Man United at the Etihad.

The Spaniard picked up the ball around 8 yards from goal following some fine work from Bernardo Silva and Raheem Sterling, as the Spaniard showed superb composure to take the ball down and fire past David De Gea.

City are currently unbeaten in the Premier League so far this season, and Silva’s goal has just helped them in their attempts to keep up this streak with his goal today.

Here’s a clip of Silva’s goal this afternoon. Cool as a cucumber!

David Silva fires home after Manchester United were pulled apart at the back.