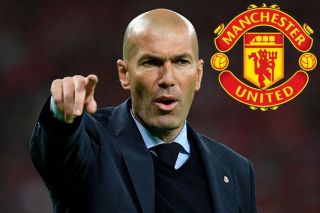 The French tactician was a big success at the Bernabeu, but has been out of work since stepping down from his position at the end of last season, just days after winning a third Champions League final in a row.

Despite recent improvements for United under current boss Mourinho, few could blame the Red Devils for being tempted to snap up someone like Zidane as he continues to be available.

The 46-year-old is also wanted by Paris Saint-Germain and Bayern Munich, but United have the advantage in the running for his signature, according to Don Balon.

It is not made clear in the report what gives MUFC that advantage, but it may be that Zidane is tempted to work in the Premier League, which is widely regarded as the most prestigious, entertaining and competitive league in the world.

Zinedine Zidane to Manchester United? He had an immensely successful spell as Real Madrid manager

United are also historically one of the world’s biggest clubs, and Zidane could be the ideal big name fit for them as they look to rediscover their glory years that have deserted them since the retirement of Sir Alex Ferguson in 2013.