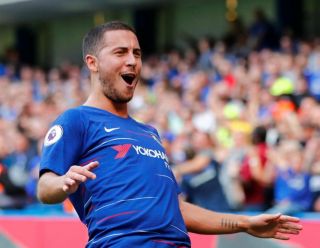 Chelsea winger Eden Hazard has stated that him suffering an ankle injury last season is the reason why he’s started this season in the fine form that he has.

This is according to the Sun, who note that the Belgian has spoken about his start to the season, stating that “Believe me, I am tired. But I think I’m in good condition to play. Last year I got an injury with my ankle for three months. So that’s why I’m fresh now.”

Although it wouldn’t have been deemed as good news at the time, Chelsea fans may be counting their blessings regarding the ankle injury Hazard suffered last season, as it seems to have revitalised the forward.

Hazard has been one of the best players on the planet since the end of the World Cup, something that he seems to be deemed down to the three-month layoff he was made to endure last season.

The Belgian international has been on fire to the Blues so far this year, scoring eight and assisting four in 14 games in all competitions, something that has played a big part in the club’s unbeaten start to the season.

If Hazard keeps up his current form, he looks set to the be driving force behind Chelsea’s title charge this year, and if the Blues are successful in that front, it could be the decisive factor in the Belgian being named PFA Player of the Year come the end of the season….