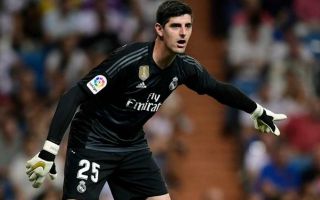 Real Madrid goalkeeper Thibaut Courtois has suggested he left Chelsea to make a step up in his career this summer by putting himself in a situation where he’d face more competition.

The Belgium international’s place as number one at Stamford Bridge was fairly safe for much of his time there, and that’s not been the case by any means with Keylor Navas also on the books in Madrid.

The pair have had to take it in turns at points this season, though Courtois seems the more likely to edge the Costa Rican out as the established first choice.

Still, Courtois has suggested the strength of the Real squad was a major factor in his decision to swap west London for the Spanish capital this summer as he also discussed the general recent improvement of the team since their change in manager.

Santiago Solari has been placed in charge since the sacking of Julen Lopetegui, who had made a poor start after replacing Zinedine Zidane in the summer.

However, Courtois also feels the team had been unlucky until recently and that this superb group of players have now unsurprisingly found form again.

Thibaut Courtois left Chelsea for Real Madrid in the summer

‘Before this run we did not have any luck, goals came at the wrong moments, the ball would have hit the post instead of going in, things like that,’ the ex-Blue is quoted in football.london.

‘My run of games? I know how competitive this club is and how difficult it is for the coach to choose in positions in a lot of games, that is why I came here.

‘We have a great spirit in the dressing room and we push each other on, we all get on very well and it is a good situation for us all.’