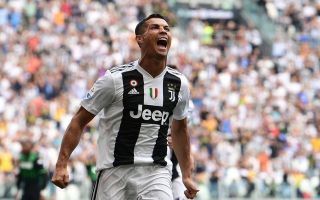 Cristiano Ronaldo has enjoyed a fine start to life in Italy, and his goal against AC Milan on Sunday night helped Juventus break a Serie A record.

The 33-year-old now has eight goals and six assists in just 12 league outings so far this season, helping the Bianconeri maintain a six-point lead over nearest rivals Napoli.

However, as seen in the tweet below, the Turin giants have now broken another league record as their 34-point tally after 12 games is a new high in the history of the Italian top flight.

Juve are aiming for their eighth consecutive Serie A title this season, and while Ronaldo is also expected to help them end their wait for success in Europe, it seems as though he is taking the Italian champions to another level domestically too.

He pounced late on against Milan to double their lead and secure all three points at the San Siro, as seen in the video below, and he’ll be hoping to continue his fine goalscoring form after the international break when Juve face SPAL on November 24 looking to improve their impressive points tally further.

Nevertheless, after their slip up in the Champions League to Man Utd, there is evidently still room for improvement and that will have been a wake-up call for coach Massimililano Allegri to suggest that they must not lose their focus.

Ronaldo adds the finishing touches to a big three points for Juventus in the San Siro. ???? pic.twitter.com/e0Hq8VhnIT