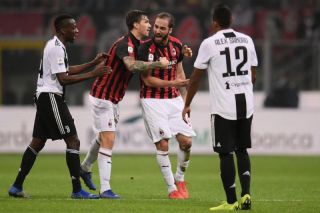 Juventus secured a 2-0 win over AC Milan at the San Siro on Sunday night, with the hosts seeing their misery compounded by a late red card for Gonzalo Higuain.

After initially picking up a yellow card for a foul on Medhi Benatia, the Argentine forward quickly saw the referee brandish a second followed by a red as he remonstrated with him, as seen in the video below.

It came after a bitterly frustrating night for the Milan talisman, as his missed penalty came at a crucial time for his side while he struggled to make an impact overall.

In turn, his emotions undoubtedly got the better of him as he lost his temper and was seen screaming in the face of the official before being held back by captain Alessio Romagnoli and urged to leave the field.

It remains to be seen whether or not he faces any additional punishment aside from the one-game suspension that will come with the sending off, but Ronaldo has surprisingly emerged in his defence and has insisted that he hopes he doesn’t face a lengthy ban.

“I told him to calm down, as he risked an even heavier ban,” he told Sky Sport Italia, as reported by Calciomercato. “He didn’t do much, he was irritable at losing the game, that’s understandable and I hope he is not punished too severely.”

Time will tell whether or not that’s the case, but from Milan’s perspective, losing Higuain for their clash with Lazio after the international break will be a huge blow in itself given that they’re direct competition for a top four finish in Serie A this season.

Should he receive a longer ban, the pressure will be on Patrick Cutrone to produce in his absence, with Gattuso lacking in options in that department of his squad.

As a result, the red card could prove to be very costly, regardless of whether or not Ronaldo believes Higuain should be spared a lengthy ban. Nevertheless, it’s still a classy move from the Portuguese superstar to defend him despite being on the opposing side.

First the referee, then Ronaldo, then Matuidi, and then Chiellini – they all bore the brunt of his outrage. #SerieA pic.twitter.com/NhIx1S2xpG