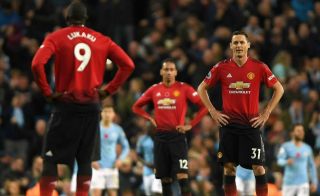 Manchester United legend Paul Ince singled out Anthony Martial for criticism after the 3-1 defeat to Manchester City in Sunday’s Premier League clash at the Etihad Stadium.

The France international has been in fine form of late, and did, in fairness, score United’s only goal against City, which came from a second half penalty.

Still, United may well feel they could have done with more from Martial in an important game, but the team was sorely lacking in attack.

The Red Devils were not helped by the fact that Paul Pogba was missing through injury, with the 25-year-old another important part of how the team plays.

Ince also noted Pogba’s absence played a big part in the result, but admitted in his Paddy Power column, quoted by the Daily Mirror, that he was particularly disappointed by the way Martial played, as he ultimately couldn’t maintain his best form in a game that really mattered.

‘We’ve been bigging up Anthony Martial for weeks – myself included – but ultimately, he didn’t perform in that game, and they’re the ones that really count,’ Ince said.

‘In terms of star quality, it was obvious that United missed Paul Pogba. There’s no doubt that he’s hard work, but they missed that presence he brings to the team.

‘I looked at the midfield on Sunday, and there was nothing exciting.’