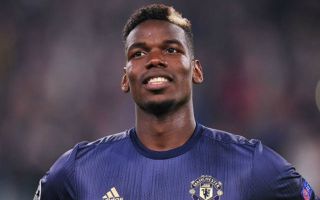 Manchester United star Paul Pogba uploaded a photo to his Instagram page of him reporting for international duty with France.

The 25-year-old captioned the image with the word ‘back’ followed by ‘soon’ in the form of an emoji.

While that’s not a huge amount of information to work with, it could be that Pogba is hinting he’s not going to be out injured for too long after missing the weekend defeat to Manchester City.

Pogba was a big miss for United that day as they were beaten 3-1 by their rivals at the Etihad Stadium in a pretty one-sided contest.

The France international had scored twice in a 3-2 win over City last season, so can obviously make the difference in big games of that type.

MUFC fans will now hope it will indeed be ‘soon’ that he’s back fit and playing for them again.