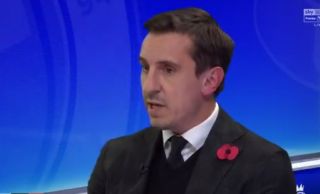 After Man Utd’s defeat to Man City in the Manchester derby on Sunday, Sky Sports pundits Gary Neville and Graeme Souness engaged in a heated back and forth.

As seen in the video below, Souness was particularly eager to get Neville’s opinion on whether or not Jose Mourinho and his coaching staff are getting the best out of the current squad.

Struggling with it to an extent but also being pragmatic and thoughtful in his response, Neville simply couldn’t decide either way and that in turn led to the debate as Souness continued to repeat his line of questioning.

Neville makes a good point in that these same players didn’t set the world alight under previous coaches and they haven’t exactly performed much better elsewhere.

However, it will be down to Mourinho to find the solutions moving forward to ensure that they don’t slip into mid-table mediocrity this season as they are well off the pace for the title and top four at the moment.