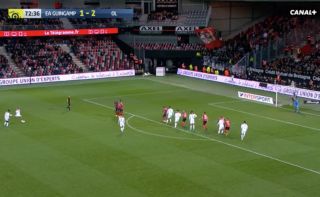 Memphis Depay scored a fantastic 35-yard free kick for Lyon on the weekend as he put Guingamp to the sword almost single-handedly.

The Dutch international, who has been fantastic for the French giants since his move to the club back in 2017, powered home the set piece midway through the 2nd half to give Lyon a 3-1.

Depay finished the match with two goals and two assists, a dazzling performance that would’ve had some Man United fans looking on jealously.

Here’s a clip of Depay’s stunning strike from the weekend. You don’t get more top-bins that that!

Memphis Depay that is just outrageous! ?

An inch-perfect free-kick right out of the top drawer ?