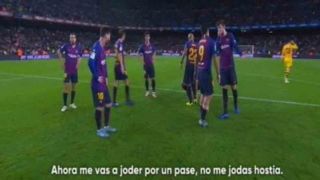 Tempers were seemingly flaring after Barcelona’s 4-3 defeat to Real Betis on Sunday, with Luis Suarez and Gerard Pique allegedly having a spat on the pitch.

Although Betis are undoubtedly a highly talented group, it was a shock to many to see them inflict defeat on the Catalan giants at the Nou Camp.

Having exposed their defensive flaws, it was a frustrating and bitterly disappointing afternoon for the reigning La Liga champions, and it appears to have boiled over slightly after the game.

As the players congregated in the centre circle after the full-time whistle, Spanish media outlets are claiming that Suarez’s comments to Pique were picked up on the microphone, as per Sport.

‘Now you’re going to f*** me for a pass, do not f*** with me,’ he said, before Pique quickly diffused the situation by replying: ‘Well, that’s it,’ it’s claimed in the report.

It’s added that Pique also had a tense moment with Arturo Vidal after failing to pass to him as he instead opted to take on a shot himself.

In turn, it will be a concern for coach Ernesto Valverde as the last thing that he needs after such a setback is to see his players at each others throats when they need to stick together, regroup and come back strong after the international break.

Given their success over the years and the closeness that the players would have had through the highs in recent times, it surely won’t drag on and they’ll have to put any frustrations and differences to the side when they return to action on November 24 against Atletico Madrid at the Wanda Metropolitano.