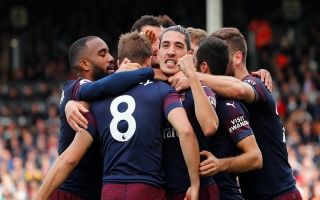 Arsenal striker Alexandre Lacazette has been unable to answer his France call-up with reports suggesting that he’s nursing an injury.

The 27-year-old has been in fine form so far this season, scoring six goals and providing four assists in 15 appearances as he looks comfortable under Unai Emery.

SEE MORE: ‘Special talent’ – Arsenal loanee rewarded for impressive form to the delight of these fans

In turn, it could be argued that he deserved a call-up from Didier Deschamps in his initial squad announcement, but he was eventually summoned after Anthony Martial was forced to pull out with an injury problem.

However, a mere matter of hours later, it was Lacazette’s turn to withdraw due to injury as per the tweet below, which notes that discussions took place between the respective medical staffs.

Further, as noted by The Mirror, it’s suggested that a groin problem is behind the decision.

With that in mind, Arsenal fans will be hoping that it isn’t anything serious and the decision to not join up with the France squad over the international break was merely precautionary.

The Gunners face Bournemouth on November 25, while there are early clashes with Tottenham and Man Utd in December. As a result, the last thing that they would have wanted is to see Lacazette return from the break with an aggravated groin injury which could sideline him.

Instead, he’ll now likely return to north London for treatment with a view of using the break to fully recover and be available for selection for Emery later this month.