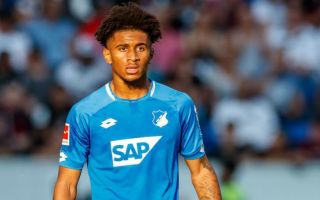 Reiss Nelson has had quite the start to life on his loan spell with Hoffenheim, and the Arsenal youngster has now landed an award to show for his efforts.

The 18-year-old has scored seven goals and provided one assist in 11 appearances for the Bundesliga outfit so far this season as he appears to be relishing the opportunity.

Having gained plenty of playing time, the youngster will undoubtedly benefit from gaining experience and proving his quality on a consistent basis to this point, and Arsenal will surely be watching his progress carefully with a view of giving him a bigger role in the senior squad next season.

To reinforce the impressive nature of his start to life in Germany, Nelson has won the Bundesliga Rookie of the Month award for October, as noted in the league’s tweet below, and naturally there was a positive reaction from many Arsenal fans to the news.

Given the injury setback suffered by Danny Welbeck last week, Gunners boss Unai Emery may well have considered the option of recalling Nelson in January to give him another attacking option for the second half of the season.

Nevertheless, allowing him to play a full campaign in Germany with Hoffenheim is arguably the smarter move with his form so far this season in mind, and Nelson will hope to continue to prove his worth and stake his claim for a key role next year.

Scoring the goals he has been and winning awards will no doubt get the attention of Emery and Arsenal, and the Arsenal fans below certainly can’t wait to see him at the Emirates in the future as while some congratulated him, others were a little less patient in wanting him to return.

He has been named Bundesliga Rookie of the Month for October.

Reiss Nelson wins the rookie of the month award. Get this kid back at Arsenal!

Bring it home boy. We are waiting for you.

Bring him back right now!