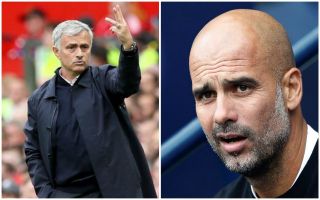 BBC pundit Don Hutchinson has revealed his belief that there could be several Man Utd players who are jealous of what they see on the other half of Manchester.

Aside from the results aspect of the argument which sees Man City currently sit 12 points clear of their rivals, there is a stark contrast in performances and style of play under Pep Guardiola and Jose Mourinho too.

It’s that latter factor that Hutchinson believes has ‘four or five’ Man Utd players jealous of what they see at the Etihad, as seen in the video below, as he argues that although they are playing for Mourinho, he isn’t convinced that they’re happy with his methods and approach.

Further, he raised serious question marks over whether or not Mourinho has in fact improved any of the players at his disposal, while in contrast, Guardiola has helped the likes of Kyle Walker and Raheem Sterling take their respective games to the next level.

With that in mind, perhaps that is a hugely important factor in why there is such a big gap in quality opening between the two sides, with United now seemingly braced for a fight to finish in the top four despite having ambitions of challenging for the title before the season started.

Whether or not Mourinho can turn things around and get them up the table remains to be seen. However, the longer it takes, the more pressure there will surely be on his shoulders as it seems that several pundits are insistent that he is the root of the issues at Old Trafford.

“I think some #MUFC players are jealous that Pep is coaching the #MCFC players down the road”@DonHutch4 believes the United squad are playing for their manager – but dislike what they’re asked to do on the training ground.