Borussia Dortmund midfielder Christian Pulisic has revealed that he hopes to play in England one day, which could pique Liverpool’s interest.

The 20-year-old has 109 appearances under his belt for the German giants to date, scoring 15 goals and has been widely tipped for a bright future at the top level of the game.

The American star has featured prominently for Dortmund once again at the start of the 2018-19 campaign, during which they have risen to the top of the Bundesliga table, seven points ahead of arch-rivals Bayern Munich.

According to Team Talk, Liverpool have been monitoring Pulisic’s progress for some time now, while Manchester United, Tottenham and Chelsea are also all being touted as potential suitors for his signature.

Team Talk reports that the Dortmund attacker admitted on Wednesday that he is open to a Premier League switch in the future, as he told reporters: “England, the Premier League, is a league where lots of kids dream of playing so there is no reason why maybe one day I won’t play here.”

He then went on to respond to questions on Liverpool’s failed £11 million bid for his services back in 2016, giving a vague answer which could now add fuel to the fire of transfer rumours.

“As you can see, we are having a great year at [German league leaders] Dortmund and I am enjoying every moment of that,” Pulisic continued.

“Then when the time comes for me to talk in the breaks about my future, then that’s when those things happen.” 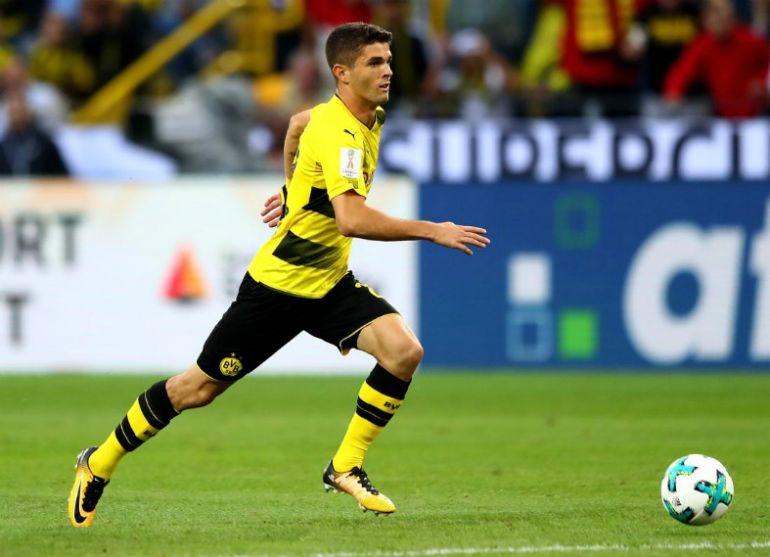 Team Talk states that Dortmund value the youngster at €70 million and with his current contract set to run until 2020, it would take a monumental offer for any club to lure him away from the Westfalenstadion.

Liverpool are going strong in the Premier League, two points behind table-toppers Manchester City and still unbeaten, but they have also only managed to win four of their last ten matches in all competitions and head coach Jurgen Klopp might be hoping to reinforce his squad further in the January window.

Pulisic is a versatile player capable of playing as a number ten, as a winger or even as a box-to-box midfielder and he could add considerable quality to the Reds, which makes this particular story one to keep an eye on with the winter transfer window now less than two months away.