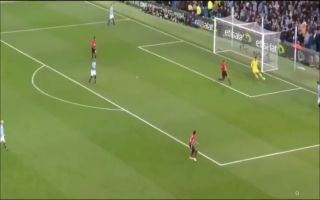 Manchester City goalkeeper Ederson showed off impressive distribution vs Manchester United in the Manchester derby and one of his fans has made a compilation in honour of his wonderful kicking ability.

Ederson’s ability to launch devastating counter-attacks is the key reason why Pep Guardiola signed the Brazilian to be City’s number one.

The 25-year-old has even managed to register an assist this season when launching the ball upfield with an inch-perfect pass to Sergio Aguero earlier this season.

Check out a compilation video of Ederson’s impressive distribution below:

Not much to do with his hands (except his little brain fart), Ederson played some beautiful passes under pressure to help City move forward. pic.twitter.com/PnSGN3Kds1