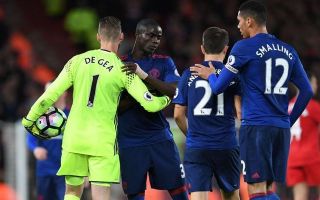 Spain are still top of the group, however they will finish 2nd and remain in ‘League A’ of the tournament should England manage to beat Croatia later this week.

Keen-eyed fans spotted De Gea’s poor display against Croatia, with some taking to social media to slate the Spaniard for his performance on Thursday evening.

The Red Devils star could’ve done much better for Croatia’s first goal, as he seemed to just stand there as former Leicester City man Andrej Kramaric hammered the ball home.

De Gea also could’ve done better for Croatia’s winner, as he palmed the ball straight into the path of Jedvaj instead of parrying it out for a corner, something that ultimately ended up costing Spain the match.

Here, we’ve selected a few tweets from fans slating De Gea for his performance for Spain this evening

De Gea fails to come off his line again. The most overrated keeper in world football, he’s a great shot stopper and that’s it.

Damn De Gea might be finished, we should cash in on him asap

Mighty De Gea beaten at his near post again ?

De Gea most overrated keeper on the planet

De Gea concedes yet again.
In other news, Water is wet.

De Gea not great again tonight. Really poor for Croatia’s 3rd. Looking like a mere mortal at times this season compared to the super human performances of previous years.