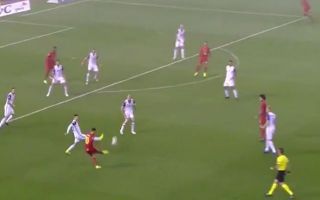 Eden Hazard has gone a little quiet for Chelsea in recent weeks, but he produced a reminder of his world-class ability for Belgium on Thursday night.

The 27-year-old has managed just one assist and no goals in his last three appearances in the Premier League, albeit he has still impressed to this point with eight goals and four assists in 14 outings for the Blues so far this season.

Hazard was on international duty this week as he captained Belgium against Iceland, and as seen in the video, he produced a real moment of class in the build-up to their first goal.

As he danced his way into space in the final third, the Belgian ace produced a stunning pass to carve open the Icelandic backline and set up a simple cross which Michy Batshuayi converted to break the deadlock.

It’s quality such as this that can set Hazard apart from the rest and he makes it look so simple. Chelsea fans will be hoping to see more of this when they face Tottenham on November 24.

Batshuayi finishes off a superbly worked team move by the Belgians.