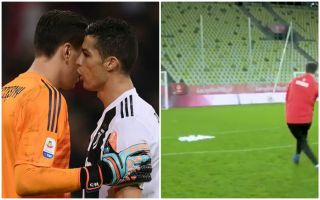 After Cristiano Ronaldo was spotted giving Wojciech Szczesny advice in the win over AC Milan on Sunday, the Juventus goalkeeper wants to return the favour.

The Portuguese superstar was seen speaking to the shot-stopper prior to Gonzalo Higuain’s penalty in their Serie A clash at the weekend, with Szczesny going the right way and keeping out the Argentine’s spot-kick.

As well as thanking his Juventus teammate, the Polish international has now offered to give Ronaldo some advice on how to take free-kicks after this stellar effort in training, as seen in the video below.

Albeit he has scored some wonderful free-kicks in his time, Ronaldo could arguably do with some fresh tips based on this video as Szczesny produces a stunning strike which sails into the top corner.

It’s unclear as to how many takes he needed, but the confident goalkeeper appears to take it in his stride and could be spending some extra time on the training pitch when he returns to Turin to help Ronaldo with his technique…

Thanks @cristiano for your help with a penalty vs Milan. I’ll be happy to repay the favour with some advice on free kicks ???