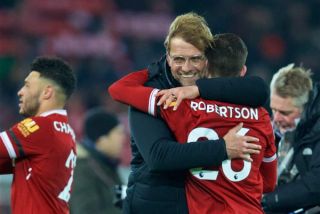 Liverpool ace Andy Robertson has revealed the hilarious response he got from Jurgen Klopp after revealing to him he was set to be Scotland captain.

The 24-year-old has gone from strength to strength at Anfield, establishing himself as the first-choice left-back in the second half of last season while continuing that run this year.

Defensively sound and an all-action player going forward, the Scottish defender has undoubtedly proven to be a fine addition to the Liverpool squad as they continue to pursue major honours and he has firmly established himself as a fans’ favourite too.

His club form has been rewarded with a regular place in the Scotland line-up, and having now been confirmed as captain, Robertson was eager to share the news with Klopp and has revealed the brilliant exchange of messages that the pair had.

“I texted him saying, ‘Just so you know, I’m getting the captaincy.” It was just out of respect because I didn’t want him finding out from someone else,” he told Open Goal, as noted by the Liverpool Echo.

“I said, ‘Gaffer, thanks very much for everything you’ve done, I’m going to be Scotland captain, I hope it can be a success’ – all that sort of stuff.

“And then he just texted back in big capital letters: ‘YOU ARE THE REAL SCOTTISH BRAVEHEART NOW! I gave him a thumb emoji and he gave me the wee dance emoji. Brilliant. That sums him up.”

It sounds exactly like something the eccentric Klopp would come out with, and clearly he was delighted with the fact that Robertson is also getting the recognition and responsibility at international level.

The German tactician will now be hoping that he can continue to improve and show the consistency that he has done since breaking into the team, as he could certainly be a solution at left-back for many years to come for the Merseyside giants.