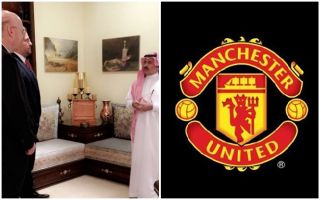 Man Utd owner Avram Glazer has been pictured in Saudi Arabia and that has led to speculation of a possible takeover of the club.

The photo below is of a meeting between Glazer, United director Richard Arnold and Dr Mohammed Abo Sak, the Saudi Arabia minister of parliamentary affairs.

Glazer is currently visiting Saudi Arabia for the Misk Global Forum, but the photo below has unsurprisingly sparked talk of a potential takeover discussion.

Crown Prince Mohammad bin Salman has been linked with takeover talks for the Red Devils, as noted by The Sun, and so coupled with this latest claim, it has unsurprisingly sparked further discussion that Man Utd could be set to change hands in the future.

Time will tell if that happens, but it’s enough to get some United fans excited on social media over what the meeting could possibly be in relation to…

MR Avram Glazer today during an informal visit to HE my father Moh. Abosak in Riyadh, Saudi Arabia.