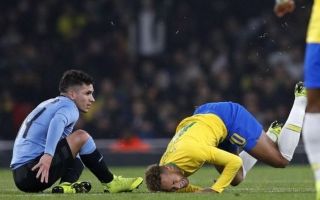 Arsenal midfielder Lucas Torreira definitely left his mark on superstar Neymar when the two faced up against each other during Brazil vs Uruguay which was being played at the Emirates.

The former Sampdoria midfielder was rightly booked for a vicious challenge on the superstar but Arsenal fans will be excited to see one of their own get one over Neymar.

Torreira used tonight’s game to continue to show off his combative style of play to Arsenal fans who have fell in love with the Uruguayan since he made the move to the Emirates.

Check out a video of Torreira’s challenge on the Brazilian below:

Neymar, Ronaldo, whoever. If you’re an opponent with the ball, Torreira’s going through you. pic.twitter.com/sKBopwfPU4

Torreira was also on hand to prevent the superstar from scoring earlier in the game by putting in a perfectly timed tackle:

A double tackle in the penalty area from Lucas Torreira tonight. I love this guy. pic.twitter.com/HK0ks3PlKf

Torreira certainly showed his fearless style of play tonight and it was fitting that Torreira played for his country at his new home of the Emirates given that his performances at the World Cup led to Arsenal signing him.