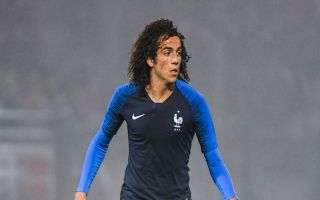 Guendouzi has enjoyed a rapid rise since making the switch to the Gunners from Ligue 2 side FC Lorient this summer.

The 19-year-old was initially part of the Under-20s squad when the international break began, but the youngster was brought into the Under 21s after impressing for the Gunners under Unai Emery this season.

Guendouzi grabbed the opportunity with both hands and impressed fans and the French media.

Guendouzi battled for the ball in midfield and played this exquisite pass in the lead up to one of France’s goals:

Matteo Guendouzi with the pre-assist for Jonathan Bamba for France U21 vs Croatia U21.#afc #LOSC pic.twitter.com/bKyOIEWdWW

The teenager has featured in 9 Premier League games for the Gunners so far this term, starting 6 games for Emery’s side.

When Guendouzi joined some may have thought that the midfielder would be a project for the future but the teenager is quickly turning into a key member of Arsenal’s squad.

Guendouzi was certainly enjoying his debut by the looks of this lovely flick:

Matteo Guendouzi enjoying himself with a cheeky flick vs Croatia U21.#afc pic.twitter.com/yZVi4iS1jQ

French newspaper L’Equipe were very impressed with the youngster’s impressive performance in the middle of the park.

This part of the review is the most telling:

“Guendouzi gave the impression of being, at 19, the boss.”

Check out a full highlights video of Guendouzi’s performance on YouTube below: