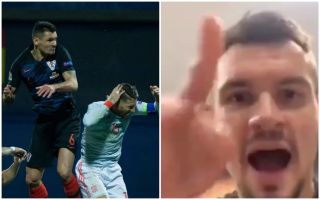 Dejan Lovren has hit out at Sergio Ramos again as their feud shows no sign of abating after Croatia’s 3-2 win over Spain on Thursday night.

As noted by Goal.com, the Real Madrid captain refused to be drawn on Lovren’s recent comments prior to the game this week as he seemingly was eager to move on from it and not give him more attention.

However, the Liverpool ace was in no mood to forget about it just yet as seen in the video below, where he is said to have called Spain a ‘bunch of p******’ while also making an elbow motion and insisting that he caught Ramos well, as seen in his Instagram post which continues the taunts.

The animosity between Ramos and Lovren dates back to the Champions League final last season during which the Real Madrid star was involved in controversial altercations with Mohamed Salah and Loris Karius as they defeated the Reds in Kiev.

Several months have since passed, but Lovren clearly relished defeating the Spaniard on Thursday night and appears to be no closer to letting the feud go.

Time will tell if Ramos provides a response, but after returning to Real Madrid due to an injury concern after the game, it’s unlikely he’ll be in front of the media until domestic action returns on November 24.

*elbow motion* “Go ahead and talk now buddy. Buddy! They are a bunch of p******”… apparently that’s what Lovren said here in yesterday’s post match celebrations directed at a certain Spaniard ? pic.twitter.com/Y3gTZFBfoZ