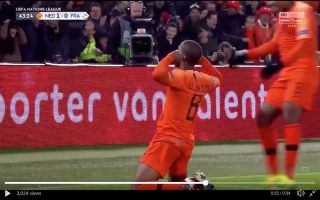 Liverpool midfielder Georginio Wijnaldum opened the scoring in this evening’s eagerly anticipated clash between the Netherlands and France.

In the 43rd minute of the tie a brilliant ball into the box from talented youngster Frenkie de Jong found its way towards Ryan Babel, who smashed a shot which was parried away by Hugo Lloris.

Wijnaldum was quick on his feet to react first and fire the Netherlands into a shock lead against the World Champions.

Wijnaldum is still a mainstay in Jurgen Klopp’s Liverpool side which is testament to the former Newcastle man’s impressive form, Wijnaldum is playing ahead of marquee midfield signings Fabinho and Naby Keita.