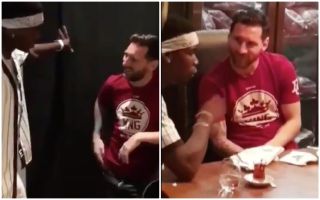 Paul Pogba and Lionel Messi were spotted in conversation as they crossed paths in Dubai on Friday, and it has led to a mixed reaction from Man Utd and Barcelona fans.

As seen in the video below, the pair were seen talking for some time at Salt Bae’s steak house in Dubai, as they appeared to be enjoying their chance meeting and the opportunity to talk to each other.

However, naturally, the focus on social media quickly switched to whether or not one or the other was trying to convince their fellow superstar to move clubs, and it quickly became apparent, as seen in the comments below, that many were convinced it was Messi doing the convincing.

As noted by the Daily Mail, Pogba has been linked with a move to Barcelona, while it’s highly unlikely that Messi will be convinced to leave the Nou Camp any time soon given he has firmly established himself as a club legend at Barca and has made no suggestion throughout his career that he could be tempted to move elsewhere.

With that in mind, the United fans below were left concerned that the Argentine icon was perhaps doing his part to sell the idea of a move to Barcelona to Pogba, with the World Cup winner raising serious question marks over his future at Old Trafford earlier this season when he conceded that he wasn’t happy, as per the Guardian.

In turn, it remains to be seen if he seeks a move next summer and if Barcelona are interested in signing him. For now, this meeting should arguably be chalked down to a chance encounter between two world-class players at the top of their game enjoying a catch up.

Paul Pogba and Lionel Messi in Dubai this evening. Messi to United is on. #AgentP pic.twitter.com/uFhxSbliba

Messi tapping up Pogba and you lot are saying #AgentP like anyone is coming to play at United under draconian law of Jose. #MUFC pic.twitter.com/FlwZVc8x00

Pogba is going to Barca instead lol

Lol its should be AgentM who convincing pogba to barca

You mean Pogba to Barcelona?

Pogba to Barcelona is on

This isn’t #AgentP working to get Messi to Manchester, this is #AgentLeo getting the aforementioned to Barcelona.

Pogba to barca it’s on