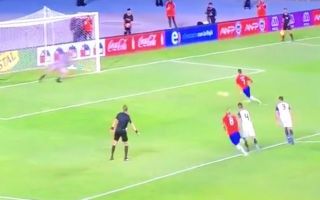 Alexis Sanchez fluffed his lines from the penalty spot as Chile fell to a 3-2 defeat to Costa Rica, albeit the Man Utd star did score a late consolation goal.

Chile were 3-0 down after 64 minutes, but Sebastian Vegas gave them hope of launching an unlikely turnaround after scoring with 20 minutes remaining.

However, the air was taken out of their comeback bid in the 82nd minute as Sanchez produced an awful effort from the penalty spot which was saved, as seen in the video below, as Chile continued to battle for a way back into the game.

The United forward did eventually score in injury time, but it was too little too late from him and Chile as they suffered a disappointing loss.

While there have been glimpses of promise from the 29-year-old in recent weeks in a Man Utd shirt, most notably his work against Bournemouth for the opening goal which was scored by Anthony Martial, he has largely disappointed and frustrated since his January switch from Arsenal.

This penalty miss will do nothing for his confidence, and although he did manage to bag a goal late on, it wasn’t enough to help Chile avoid defeat.