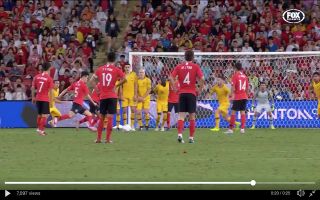 Manchester United target Mathew Ryan produced an excellent save whilst representing Australia earlier, the save would rival some of David De Gea’s best ever work.

Earlier this month, a report from The Sun highlighted that Ryan topped United’s list for a new shot-stopper.

Ryan could well be De Gea’s replacement with Jose Mourinho also sensationally revealing that he is ‘not confident’ of keeping the Spaniard at Old Trafford.

Check out a video of the save below:

What an effort to deny the Korea Republic a certain goal! ????? pic.twitter.com/BxuzCeHl9h

Outstanding save from @MatyRyan but he’s no stranger to these sort of saves. Cracking goalkeeper #BHAFC

Brighton have put some distance between themselves and a potential relegation dog-fight, Chris Hughton’s men are currently sitting in 12th place in the Premier League.

Ryan has been one of Brighton’s standout players so far this season and the Australian has actually outperformed De Gea this term.

Ryan has produced 46 saves so far this season, 4 more than De Gea’s total for the campaign so far. The former Valencia and Club Brugge shot-stopper could well be on his way to Old Trafford very soon.

Check out fan reaction to Ryan’s spectacular save below:

Honestly think Mat Ryan would be an excellent replacement for De Gea at Manchester United. His on the ball skills are probably better and he’s an excellent shot stopper. #AUSvKOR

Mat Ryan is definitely up there among the best Goal keepers in the League.
Could easily play for a TOP 6 side now. Absolute Class.