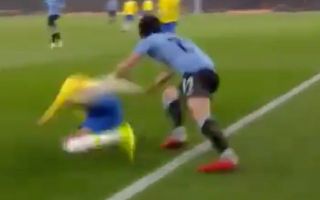 It’s fair to say that Neymar and Edinson Cavani put club camaraderie to one side on Friday in Brazil’s clash with Uruguay at the Emirates.

As seen in the video below, Cavani sparked the heated exchange with a foul on the Brazilian forward, albeit replays suggested that there was minimal contact despite it being late.

Neymar clearly wasn’t impressed with the challenge though, as he reacted angrily as Cavani tried to help him up before the pair awkwardly went their separate ways.

Whether it was merely just an angry spat in the heat of the battle or a concern for PSG coach Thomas Tuchel remains to be seen, but it’s not ideal to see the pair react like that when countless other club teammates have shown their affection for each other even when clashing on international duty.

As noted by Goal.com, the pair were previously involved in an incident over who took a PSG penalty which led to suggestions that all was not well. This latest spat won’t do too much to dismiss those ongoing concerns…