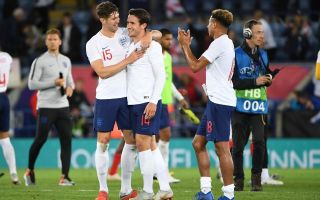 A number of Arsenal and Tottenham fans in particular seem to be impressed by the first-half performance of Ben Chilwell in England’s game against Croatia.

Although today’s Nations League match at Wembley has been far from a classic, it seems young defender Chilwell is really catching the eye at left-back.

The 21-year-old has impressed in the Premier League with Leicester City as well, and it would not be a big surprise if he made his way to a top club before too long.

Despite his relative youth and inexperience, Chilwell now has five caps for England and looks more than comfortable at this high level, so he could well do a job for teams like Arsenal and Spurs.

The Gunners could do with a long-term replacement for the ageing Nacho Monreal, while Sead Kolasinac has struggled with injuries since his move to the Emirates Stadium last season.

Tottenham, meanwhile, could well see Chilwell as an upgrade on Danny Rose and Ben Davies, who have rotated in the left-back slot for the last couple of seasons.

Think arsenal could do worse than look at Chilwell. Needs to work on passing but they could work on that at Colney#uta #WeAreTheArsenal #goonerfamily

Time for me to watch Chilwell and wish he played for Arsenal again.

Ben Chilwell looking totally at home in an England shirt. Only his fifth cap. #ENGCRO #ENG

Chilwell is so good

Spurs should go in for Ben Chilwell. Would be an excellent LB and would be a mainstay in the team for many years to come.

Ben Chilwell is the best English LB by a mile, none of this Luke Shaw nonsense