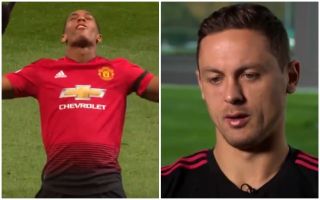 Manchester United midfielder Nemanja Matic has told Anthony Martial he can still improve despite his recent fine performances for the club.

The France international’s United future looked in some doubt at the start of the season as he struggled to break into the team at all.

Now, however, Martial is one of the Red Devils’ most in-form players after scoring for the team’s last five Premier League games in a row.

Matic is a big fan of the young attacker, but explains in this video clip below that he still feels he could improve.

This is an important message for a player who has struggled for consistency in his time with United.

While there is no doubt over his ability, his attitude has come into question before, so Matic seems wise to keep him on his toes here.