Manchester City are favourites to sign Frenkie De Jong from Ajax next year, with Barcelona resigned to missing out on the Dutchman.

The 21-year-old has emerged as one of the biggest talents in European football this year and has made a great start to the season in Holland, featuring in 11 Eredivisie games for Ajax and playing a prominent role in the Champions League.

According to the Daily Mirror, his displays have earned attention from a number of top clubs, with Barcelona and Man City emerging as the frontrunners for his signature and poised for a transfer battle when the market reports in January.

However, in a shocking new development, City have apparently edged ahead in the race for De Jong and are on the verge of agreeing a £61 million deal for the young midfielder, as per the Mirror.

City have been tracking his progress for months and Pep Guardiola hopes that the Ajax starlet can be a long-term replacement for Brazilian stalwart Fernandinho, who will turn 34 in May. 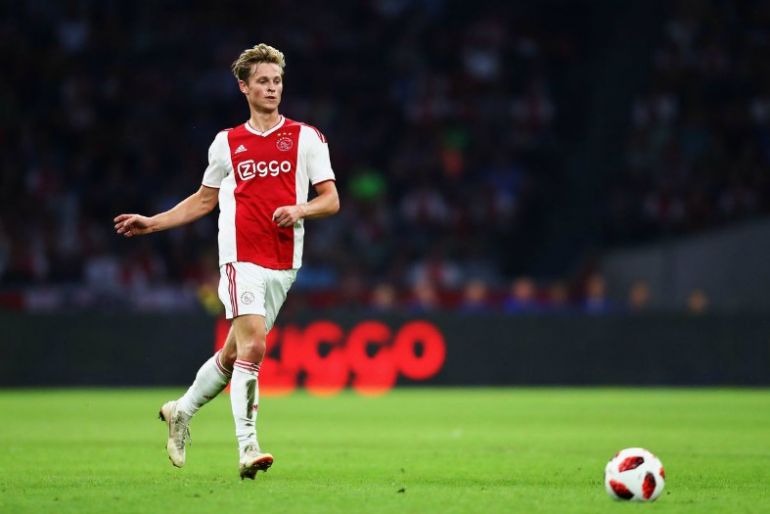 The Mirror reports that Barca have accepted that De Jong is City bound, with the winter transfer window less than two months away and if this particular transfer does indeed go through in the new year, then it will represent another huge blow to City’s title rivals.

The Netherlands international is a quick-thinker on the pitch, agile in possession and a real danger when it comes to defence-splitting passes, which means he would be a great addition to Guardiola’s ranks and increase their chances of a Premier League title defence even further.

There seems to be no stopping City at the moment, on the pitch or in the transfer market and by beating Barcelona to such a high profile signing it just goes to prove how powerful they have become as a brand over the last decade.