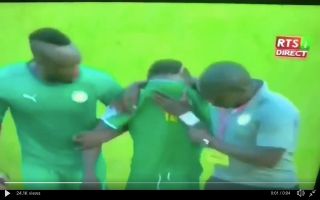 Liverpool star Sadio Mane was in tears at the final whistle despite the fact that Senegal had beat Equatorial Guinea 1-0 in the Africa Cup of Nations qualifier.

Mane had to be helped off the pitch by his teammates after bursting into tears at the end of the match, fans were unsure as to why the star was crying as Senegal had won and were already qualified for the Africa Cup of Nations.

It has now been revealed that Mane was in fact left in tears as a result of the Senegal fans booing him for a large portion of the match after the Liverpool star missed a golden chance to score in the second half.

A report from metrodakar has revealed that Mane is struggling to cope with the massive amount of pressure that has been heaped onto his shoulders for his country.

Mane has struggled to replicate his form for Liverpool for his country and it seems the pressure of the national team is beginning to become too much for the attacker.