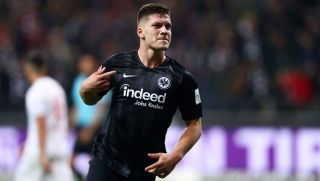 Barcelona and Liverpool are reportedly monitoring youngster Luka Jovic as he continues to impress on loan at Eintracht Frankfurt this season.

The 20-year-old is currently on loan with the Bundesliga outfit until 2019 from Benfica, and he is certainly making a positive impression this season with 12 goals and three assists in just 15 appearances.

In turn, as is the way the transfer market works these days, it hasn’t taken long for clubs around Europe to be linked with a move and as noted by Mundo Deportivo, Barcelona and Liverpool are said to be keeping an eye on the talented youngster.

It’s added that he has a €45m release clause in his contract with Benfica, and so it remains to be seen if they will look to cash in on their starlet or perhaps plan a future with him if he continues to impress in Germany.

As far as both Barcelona and Liverpool are concerned, both Ernesto Valverde and Jurgen Klopp will arguably be keen on the idea of bolstering their attacking options given that they seem a little light up front for clubs looking to compete on multiple fronts.

The Catalan giants seemingly have Luis Suarez as their only out-and-out striker option, while there’s a lack of quality depth behind Roberto Firmino at Anfield.

With that in mind, Jovic would make sense for either European giant, but ultimately it is still a gamble for them given that he hasn’t proven himself at the highest level by showing that he score goals consistently across an entire campaign.

It seems as though he has certainly grabbed the attention of Barcelona though, as Mundo Deportivo add that the reigning Spanish champions sent scouts to watch him in action for Serbia this week, thus suggesting that they are perhaps primed to take a decision on him first.