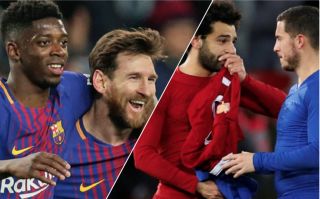 Barcelona are reportedly considering a move to join the running for the transfer of Chelsea forward Eden Hazard if he’s available for a reasonable price.

According to Don Balon, the Catalan giants could be interested in rivalling Real Madrid for the potential Hazard transfer as they look for a decent-value replacement for the struggling Ousmane Dembele.

MORE: Chelsea given date to seal £70m transfer as sporting director speaks out on rumours

The Blues will be sweating over Hazard’s situation at the moment as the Belgium international will be in the final year of his contract next season.

As Don Balon notes, that means he could be on the move for below his true market value in the near future as top clubs seemingly take notice of his situation.

With Dembele struggling at the Nou Camp since joining from Borussia Dortmund last season, it makes sense that Barca could be considering a more proven player to come in and provide an upgrade on the inconsistent 21-year-old.

Ousmane Dembele has struggled at Barcelona and could be replaced

Few could argue Hazard looks a major improvement on current form, and it’s rare that players as good as him become available on the cheap.

It remains to be seen if Chelsea can prevent any of this by tying him down to a new deal in the coming months.