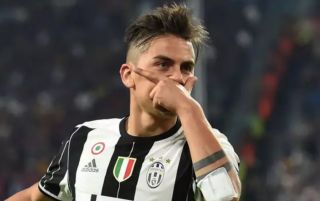 As noted by Goal.com, question marks have been raised over the Argentine’s future in Turin, with Man Utd being linked with a move next summer.

SEE MORE: Arsenal star Aaron Ramsey to earn a whopping £10m if he leaves Arsenal for this European giant

Nevertheless, it’s difficult to see an exit materialise given the importance he still has for coach Massimiliano Allegri, with the expectation that he will lead Juventus to more success in the coming years alongside Cristiano Ronaldo.

Dybala has scored 74 goals in 154 appearances for the Bianconeri, winning three Serie A titles and three Coppa Italia trophies since joining from Palermo. Coupled with the fact that he’s still just 25, he has many more years at the top to come.

However, as reported by Calciomercato, via the paper edition of Tuttosport, it’s suggested that Mbappe is on a three-man shortlist of marquee signings if Dybala leaves, along with Marco Asensio and Paul Pogba.

Asensio would arguably be the most like-for-like option given the similarities between the two players, while Pogba wouldn’t really address the potential void given his midfield role.

In turn, Mbappe would undoubtedly be the best option and the one move to make a real statement to the rest of Italy and Europe, but whether or not he can be prised away from PSG remains to be seen.

The 19-year-old has bagged 13 goals and seven assists in just 13 appearances so far this season, as he continues to prove he is one of the biggest talents in Europe.

Following on from his World Cup triumph with France this past summer, there is no doubt that he has a very bright future ahead of him.

With that in mind, if Juventus were to lose Dybala, signing Mbappe would certainly fill the void. However, it’s surely an attacking reshuffle that they would rather not have to oversee unless forced into it through a Dybala exit.