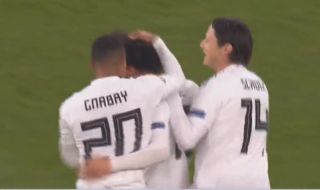 Manchester City winger Leroy Sane got on the score sheet for Germany tonight after a blistering start in their Nations League game against the Netherlands.

The 22-year-old may not be having the best season at club level after also missing the World Cup with Germany in the summer, but he’s shown what he can do with this strike.

Despite a poor first touch after being played through, Sane kept his cool and drilled the ball in low and hard into the far corner.