Paris Saint Germain winger Neymar does not want to play alongside Sergio Ramos, which has raised fresh doubts over his proposed move to Real Madrid.

The 26-year-old has been heavily linked with a move to the Santiago Bernabeu over the last few months, with club president Florentino Perez keen on bringing in a ‘galactico’ capable of filling the void left by Cristiano Ronaldo’s departure to Juventus during the summer transfer window, as per the Daily Express.

The Brazilian has been in fine form for the French champions this term, scoring 13 goals in 15 games across all competitions while helping Thomas Tuchel’s men storm back to the top of the Ligue 1 table with a 100% record after 13 matches.

According to Don Balon, Madrid are the frontrunners to sign Neymar next year ahead of his former club Barcelona, but the presence of Sergio Ramos in the Los Blancos team now threatens to scupper any potential deal.

The PSG superstar has reportedly ruled out signing for the European champions while the Spaniard remains at the club, which could be a huge issue given his status as the team’s captain and his loyal service over the last decade – as Don Balon reports. 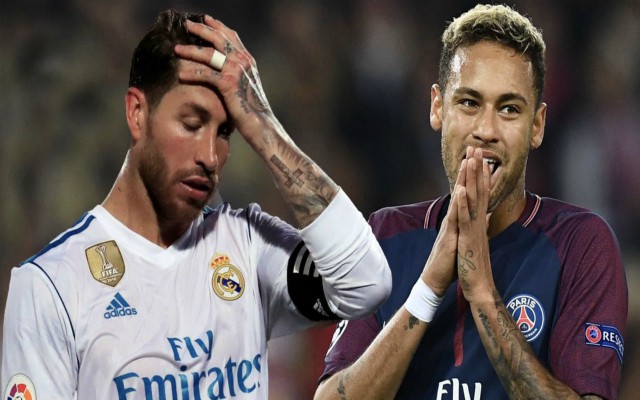 Ramos is a divisive character well known for winding up opponents and his no-nonsense style on the pitch, but he remains to this day one of Madrid’s most important players and one of the best centre-backs in European football.

Neymar has a huge ego and penchant for controversy himself, with a history of theatricality and bad sportsmanship that has blighted his success to date, however, he is talent is undeniable.

The Brazil international could quite easily clash with Ramos at the Bernabeu and he has recognised this already, but by airing his doubts publicly he may have harmed his chances of playing for Los Blancos in the future rather than increased them.

The Madrid captain is 32-years-old now but still has the physicality and strength to play at the top level for many more years yet, while Neymar is eager to cement his place in the annals of football history as soon as possible, which might mean that he has to look elsewhere for his next step forward towards greatness.