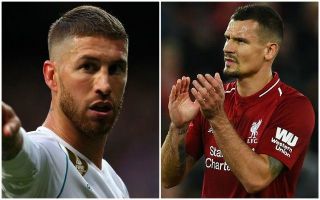 Sergio Ramos appears to have continued his ongoing feud with Dejan Lovren after he was spotted liking an Instagram post which mocked the Liverpool star.

The pair have seemingly had a running battle since last season’s Champions League final in which the Real Madrid captain was involved in controversial incidents with Mohamed Salah and Loris Karius.

Madrid of course went on to win the game in Kiev to claim European glory, but the feud between Ramos and those in Liverpool appears to have rumbled on significantly longer than anticipated.

After playing down talk last week, Ramos was then the subject of the video posted below, with Lovren slamming him after Croatia’s win over Spain.

Dejan Lovren calls out Sergio Ramos because the things Ramos said at the press conference before the match. Lovren says Ramos is pu**y. Brilliant. ?? pic.twitter.com/5A3yT2fZmp

While we waited to see if Ramos would hit back, it appears as though he’s letting his Instagram activity do the talking, as seen in the tweet below, where he appears to have liked a post mocking Lovren with the Liverpool man seen in tears in the foreground as Ramos holds the Champions League trophy.

Whether or not Lovren takes it upon himself to now respond remains to be seen, but it’s safe to say that these two really don’t like each other.

It will certainly be interesting if Real Madrid and Liverpool cross paths in the Champions League again this season, as Ramos can undoubtedly expect a hot reception at Anfield.