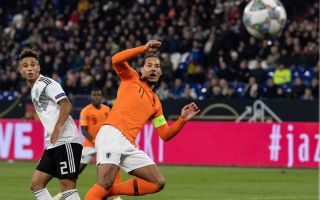 This Virgil van Dijk goal is not only very good, it’s also arguably a warning sign to Alvaro Morata and Romelu Lukaku that their finishing is now behind that of a central defender.

The misfiring pair were two of last summer’s most high-profile signings for Chelsea and Manchester United, respectively, but have both been majorly disappointing.

Morata in particular has flopped since swapping Real Madrid for the Premier League, scoring 15 goals in 48 games last season and six in 16 so far this term.

Lukaku, meanwhile, got off to a better start at Old Trafford with 27 goals in all competitions last season, though he’s managed just four so far this year.

Unsurprisingly, fans are now trolling the pair by saying Van Dijk is a better finisher than either of them right now.

We’re not quite sure the Dutchman could regularly do a stint up front, but his finish against Germany really was expertly-taken, and that kind of technique would undoubtedly serve Morata and Lukaku well…

Van Dijk showing Morata and Lukaku how to finish

Van Dijk is actually a better finisher than Morata.. I cba

how can Van Dijk be a better striker than Lukaku ????? LMFAOOO ??

Van dijk is better than lukaku… argue with yourself

Van Dijk is a better finisher than Morata.