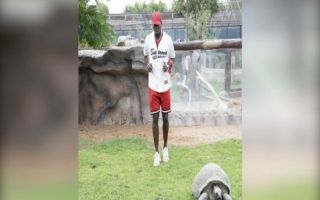 Manchester United midfielder Paul Pogba took to social media on Sunday to mock his own spot kick-style, using a tortoise as a prop.

The Frenchman was forced to sit out United’s 3-1 derby defeat at the Etihad before the international break with an injury, but he has been touted for a quick return to action with Crystal Palace set to visit Old Trafford next Saturday – as per the Evening Standard.

The 25-year-old has been enjoying some time off in the meantime and posted a video on Instagram over the weekend to poke fun at his infamous penalty technique, which sees him approach the ball slowly on his tip-toes in an attempt to deceive the goalkeeper.

Pogba clearly knows how to laugh at himself because he chose to race against a tortoise in this clip, posting the caption: “I’m not THAT slow.”