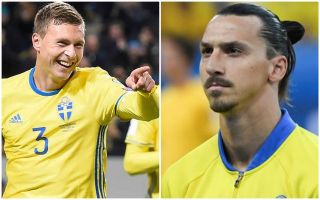 The 24-year-old recently dethroned Ibrahimovic as Swedish player of the year, and he also got himself up to two goals for the national team with his strike against Russia tonight.

While Lindelof still has some way to go before catching former Red Devil Ibrahimovic at the top of his country’s top scorer list.

It seems highly unlikely that Lindelof, a central defender, will ever come close to that kind of tally, but he’s certainly a confident lad after his recent improvement in form.

That’s what he seems to be suggesting with his tweet to Ibrahimovic anyway, with Lindelof simply writing ‘watch out’ and tagging Ibrahimovic in the post.

To be fair, it’s a decent finish from Lindelof, even if it’s not quite Zlatan-esque just yet.