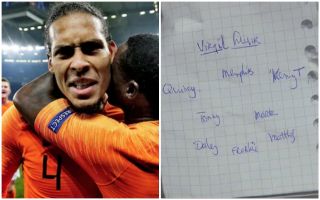 Virgil van Dijk was the hero for the Netherlands on Monday night as his late equaliser secured a 2-2 draw against Germany and booked their place in the UEFA Nations League semi-finals.

After Germany had raced into a two-goal lead, it looked as though the Dutch were set to spurn their chance of advancing in the competition.

However, after Quincy Promes gave them hope, Van Dijk stepped up with a brilliant finish to ensure that they will take part in the semi-finals.

The Liverpool defensive ace didn’t find himself in an attacking position by chance though, as the images below show, with a tactical note making its way onto the pitch prior to the second Netherlands goals which asked for Van Dijk to push up and essentially play up front.

Koeman was likely thinking that his height and physical presence could make an impact for his side, but Van Dijk went one better and produced a great finish to secure the draw.

On one hand, it was arguably the obvious thing to do for the Netherlands in that situation, but to go for it and pull it off to get the desired result should result in praise for all concerned.

This is the note that led van Dijk to score his goal pic.twitter.com/h1odnPwKK2