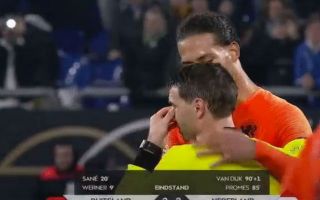 Virgil van Dijk showed his class on Monday night as the Netherlands ace consoled the referee after their draw with Germany in the UEFA Nations League.

The Liverpool defender was on the mark as he scored a late goal to send the Dutch into the Nations League semi-finals as he completed a dramatic late comeback to earn his side a 2-2 draw.

However, as seen in the video below, his class wasn’t restricted to his efforts during the game, as he was seen consoling referee Ovidiu Hategan after the game.

It was reported prior to the encounter that the official’s mother had passed away and despite that, he had decided to continue with his job.

Van Dijk was seemingly aware of this and upon seeing him getting emotional after the full-time whistle, he was seen consoling Hategan.

“That man broke down, stood with tears in his eyes because he had just lost his mother. I wished him strength and said that he had refereed well. It’s a small thing, but maybe it helps him,” he told the media after the game.

It’s a classy move from the Dutchman, and it’s hoped that Hategan does indeed take some level of comfort from it in what is undoubtedly a difficult time for him.

Virgil van Dijk on consoling referee Ovidiu Hategan after the game: “He broke down, stood with tears in his eyes because he had just lost his mother. I wished him strength & said he had refereed well. It's a small thing, but maybe it helps him." pic.twitter.com/2DSkMpnOGy

Virgil van Dijk consoled referee Ovidiu Ha?egan at full-time: "He broke down and started crying, because his mother recently passed away. I wish him strength and told him that he officiated well. It's a small thing, but I hope it helped." pic.twitter.com/ZVTIxWS0k6