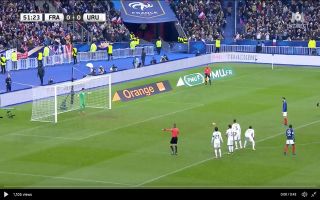 Chelsea striker Olivier Giroud held his nerve from the penalty spot for France this evening and in doing so cemented himself as one of France’s most prolific players ever.

In the 50th minute of the tie France were awarded a penalty after former Southampton defender Martin Caceres blocked Antoine Griezmann’s shot with his hand.

The referee waved away Uruguay’s protests and pointed to the spot.

Giroud stepped up and calmly slotted the ball into the back of the net and in doing so the ex-Arsenal star moved up to fourth in France’s all-time scoring charts.

Giroud is only behind David Trezeguet, Michel Platini and Thierry Henry.

Check out a video of the penalty incident below:

Giroud is certainly one of the most important in France’s squad and the target-man was integral in Les Blues journey to lifting the World Cup this summer.

Ex-Tottenham manager and specialist in failure, Jose Mourinho, is quids in again as latest payout will see him past the £50m mark
More Stories Maurizio Sarri Olivier Giroud