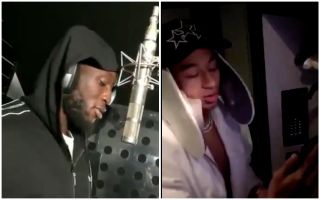 Romelu Lukaku isn’t having much luck on the pitch right now, and he certainly isn’t faring much better off it as the Man Utd star attempted to show off his rap ‘skills’.

The Belgian international is set to release his own track, ‘New Levels’, according to reports, while he gave a glimpse into his talent in the video below.

It’s fair to say though that Jesse Lingard is not impressed and has hilariously mocked his United teammate with his own video, as seen below.

Kitted out in his dressing gown and with a pair of flip flops over his ears, the United joker reads lyrics from his phone to copy Lukaku, and he’s probably received a more positive reaction than that of his teammate who unsurprisingly got a bit of a negative backlash.

Given his struggles on the pitch so far this season, the 25-year-old United striker would probably be well advised to focus on his football and perhaps leave the music career for another day…

Lukaku has to punch up Lingard for this when the International Break is over ???? pic.twitter.com/RC0EpGMqrJ