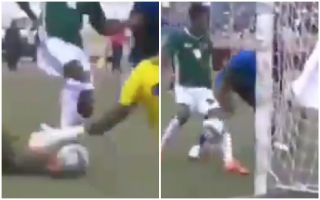 When it comes to bad misses, we bet you haven’t seen anything quite as bad as this double effort from Lesotho ace Tumelo Khutlang against Tanzania.

Fortunately for Khutlang, despite the fact that he was left embarrassed as his shocking misses went viral, he can take consolation in the fact that Lesotho secured a win in their AFCON qualifying encounter.

Nevertheless, he won’t be forgetting this horror double miss any time soon, as he spurned a great chance to get himself on the scoresheet.

While he badly miskicks his first attempt which sends the turf flying under his boot, the second is just abysmal as he completely mishits his effort and misses the ball, as seen in the video below.

As he collapses on the ground in shock over what’s just happened, the reaction from the bench says it all.

There have been plenty of appalling and memorable misses over the years, but credit to Khutlang, as he has certainly put his name in the hat for one of the worst of all time.

Lesotho Striker Tumelo Khutlang produced two unbelievable howlers as his side won their #AFCON2019Q game against Tanzania at the weekend. pic.twitter.com/YO5Y1AN3Jr